The Revenant is a beautiful, simple film that wants to be more and falls a bit flat.

The Revenant is a beautiful, simple film that wants to be more and falls a bit flat. Leo gives an intensely physical performance in near total silence, but doesn’t portray a character so much as a force of nature. Without any shred of personality outside of iron resolve and despair (which sounds like enough, but really isn’t), his Hugh Glass is entirely uninteresting despite being in one hell of an interesting scenario. Most of his characterizations come from flashbacks and dream sequences, which are all ridiculously pretentious (a broken church! hair falling up!) and serve to break the spell the movie might have cast at every turn.

Seemingly untrusting of its audience to pay attention, the movie inserts side characters to pan to during Glass’s trip that don’t add anything to the main story, except for the odd flash of energy from Tom Hardy’s cowardly Fitzgerald. In fact, there’s probably a great movie out for the taking that focuses more on Fitzgerald being chased by Glass rather than Glass chasing Fitzgerald, as this is a weasel who embodies the selfishness and animal instincts of the frontier. Its a shame he’s relegated to a sideshow and performs a (completely fictional) act that renders morality black-and-white. In fact, the whole movie is afraid of moral grayness, serving up evil Frenchmen and noble Pawnee on a platter.

At the end of the day, the movie is still beautiful enough to be worth at least a glance. I’ve never seen more lovingly shot pictures of the winter woods, and it captures the unspoiled sparseness of the frontier (a point it hammers on the head with some CGI bison, just in case we missed it). The violence is portrayed unflinchingly, most notably in the much-touted bear sequence and the finale, although it’s not above using body horror as a shortcut (very effective body horror though). There’s a lot to like in here; its just surrounded in a lot to not. 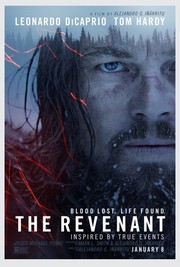 One thought on “There’s a lot to like in The Revenant. There’s also a lot to not.”